Best sites in the East of England

About-Britain.com - a thematic guide to Britain
You are here:  About Britain  › Tourism  › Regional › the East of England


Heritage tourism in the east of England


Places to stay in the East of England
Hotels, apartments and other accommodation at best rates from  Booking.com 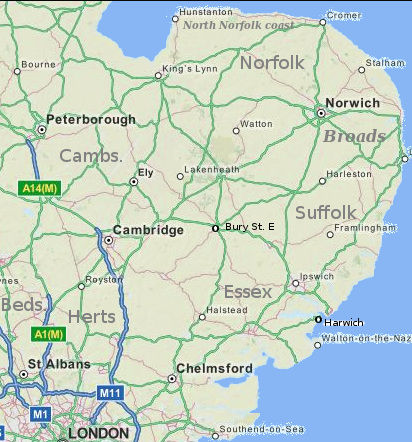 The east of England

The East of England consists of the counties to the north and north-east of London, as far north as the Wash - the north of Cambridgeshire.  It includes the area historically known as East Anglia, plus the counties of Bedfordshire and Hertfordshire. For eastern England south of London see south-east England .

The "East" of England starts where London ends, and most of this region is very easy to reach from the Capital. Visitors reaching England from Hoek van Holland in the Netherlands (Stena line) or from Esbjerg in Denmark (DFDS ferries) will arrive directly in this region of England, if they take the ferry to Harwich. Harwich, in Essex, is well connected to London by train services and by road, and to the north of England, avoiding London, by road. 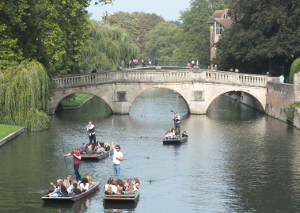 Cambridge
Largely off the track of wars, skirmishes and potential invasions since the Middle Ages, the East of England has a peace and tranquility that reflects the calm waters of its slow moving rivers. Not surprising therefore that the region should be strong on cathedrals and elegant stately homes, and short on castles and fortresses. Only during the Second World War was this once again, briefly, a strategic area, as it had been in the times of the Anglo Saxons and the Vikings.


The most interesting rural areas, outdoor attractions and coasts

Much of Norfolk and Suffolk are lightly populated rural areas, with plenty of good countryside and opportunities for walking and cycling. The area is popular with cyclists, because it is relatively flat.

Two top quality attractions for those interested in old aeroplanes and old cars.

Low-lying land, the East of England is characterised by many navigable rivers, lakes and canals. Picture top of page : Ely.
Britain's "low country", the areas of East Anglia and from the northern limits of London to Lincolnshire is an attractive area that, apart from Cambridge and the Norfolk Broads, is less visited by tourists than it ought to be.


Hotels with character...
Find
Independent hotels in the east of England

Saturday market in the old centre of St. Albans, with the Cathedral in the background