The regions of Britain 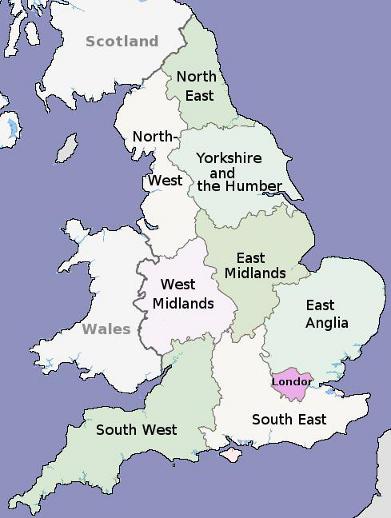 England is not divided into regions , at least , not like the US with its states, or Germany with its Länder, with their state or regional governments and administrations. In England, the notion of "region" does not exist - except for the London area.  The nearest thing that exists in Britain to an American state or a German Land are the constituent nations of the United Kingdom, England, Scotland, Wales and Northern Ireland.
Each nation has its own regional parliament (Scotland) or assembly (Wales and Northern Ireland), with considerable devolved powers; but within England itself, there is no devolved regional administration. Powers that are devolved are done so to metropolitan areas (large urban areas), to boroughs, or area authorities, not to any regional council or assembly.

Nonetheless,  England is divided into regions statistically because the European Union uses the concept of "regions" for many statistical and economic analyses, for the allocation of funding in the framework of European regional programmes, and for the determination of constituencies for elections to the European Parliament.
With the exception of the London area, which has a powerful administration, the English regions are thus largely empty shells. And this is what the English want.
Between 1998 and 2010, English regions enjoyed embryonic non-elected administrations, as a precursor to the establishment of real regional government in England; but voters were not particularly keen on the idea. From 2004, the project was put on ice, and indeed, in a referendum in 2004, voters in the north-eastern region rejected the idea of a regional assembly for their region by an overwhelming majority of 4:1 against. Given this clear rejection in the region considered logically most likely to benefit from a regional assembly, because farthest from London, the project was abandoned, and the embryonic regional administrations were phased out one by one.


Hotels with character...
Find
Independent hotels in London and the suburbs

Why do the English not want their country to be divided into regions?

In short, two reasons: the cost involved, and the perception that they are quite unnecessary. Setting up a new layer of  territorial administration is seen as an expensive and unnecessary operation. Voters do not believe that their region would be better managed by the creation of a new administrative layer – quite the reverse. Polls have shown that voters believe that the establishment of regional assemblies and a new administrative layer would complicate life, create a bureaucratic confusion and be costly for taxpayers.

The rejection of regionalisation by the English is also due to the artificial nature of the existing regional structure used for statistical purposes (as illustrated on the map). While some of the statistical regions, like the Southwest, correspond more or less to kingdoms that existed before the Norman Conquest in 1066, this has little relevance for the English in the 21st century. For over a thousand years, England has been divided not into regions, but into counties , also known as shires. Thus, apart from the London area, the other eight regions have no historical basis. They were more or less set up in the 1960s to correspond to areas covered by regional television stations; some have an obvious "capital", others have more than once city that could claim the title of " regional capital " .
In addition, few people in England identity with a region; people feel they belong to a county, or a city, but not to a region. A person from the northeast of England will maybe say "I'm a Geordie" (a person from Necastle on Tyne), but not "I'm a north-easterner":  Someone from Devon, in the southwest, may say "I'm a Devonian", but is unlikely to say "I'm a south-westerner", or even less likely to say  "I'm from Wessex" (Wessex having been the ancient Anglo-saxon kingdom of the southwest).

Functions of the English regions

Since 2010 , the regions of England no longer have any function except as a framework for the collection of economic and social data. For matters of public services and facilities for which coordination between neighbouring areas is desirable, if not essential,  there are ad hoc associations of mayors or local officials.
In England, and in Britain as a whole, many of the functions and services that are run by States in the US, or by Länder in Germany, or by regions in France, are run by devolved trusts or authorities, private operators, or operate autonomously within a national framework. These include hospitals, policing, schools, emergency services and local transport.

In spite of the absence of regions, England used to have "Regional tourist boards " , but these regional tourist offices depend on the national tourist board, called " Visit Britain". Interestingly, England's eight tourist regions did not fully match the statistical regions, and tourist areas did not always have the same name as the statistical region they covered. Thus, in terms of tourism, the West Midlands region was called "The heart of England" . Today, area tourism structures in England cover smaller areas. 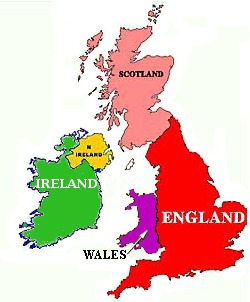 Countries of the British Isles

UK - Europe - World
Just click to discover great UK stores and brands that deliver to your home.  Food, fashion, gifts, souvenirs... Get anything from the UK from the safety of your home.
Offers may include free delivery