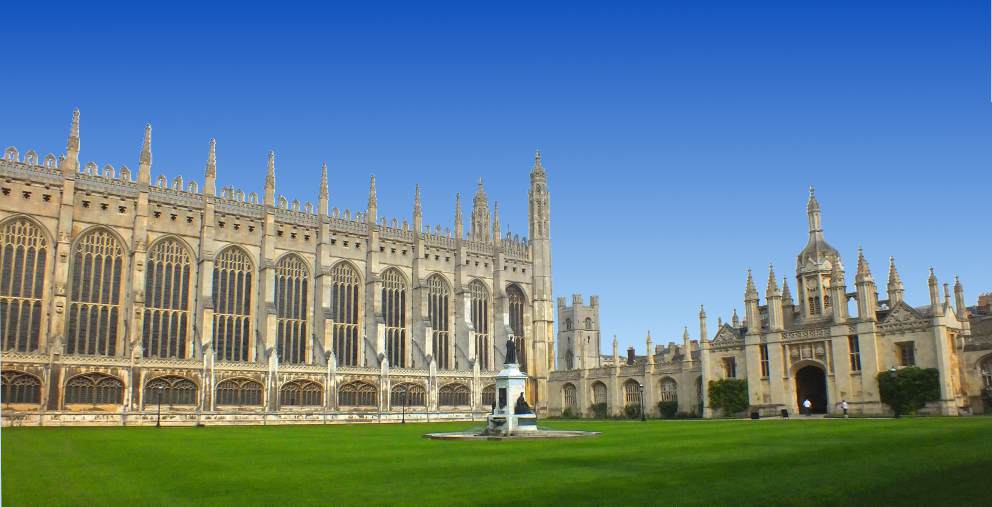 
Hôtels in in Oxford and Cambridge
A great selection at best rates from  Booking.com
:

The universities of Oxford and Cambridge are among the four oldest universities in the world.  Since their founding in the twelfth and early thirteenth centuries, they have remained without a break among the greatest and most prestigious universities in Britain, and today in the world.
For many centuries, Oxford and Cambridge  were the only universities in England. Located in two small market towns some fifty miles from London, these historic universities were able to grow and develop over the centuries, with the founding of new "colleges" to cater fro growing numbers of students.
Oxford and Cambridge colleges have always been autonomous or independent institutions, within the framework of their university. The collegiate structure of these universities allowed them to grow organically over the centuries, by the addition of new colleges, set up by kings, princes and other benefactors. The system still continues today, though today's benefactors are more likely to be successful corporations or their founders, rather than kings or queens.
Located in small towns in the heart of rural England, far from the turmoil of any great cities, and well endowed by their benefactors, the colleges had room to develop. While some buildings were obviously demolished over the centuries to make room for more modern or larger developments, both Oxford and Cambridge have preserved an amazing heritage of prestigious secular and religious buildings from Mediaeval times onwards. Many of the colleges, and their grounds, are open to visitors.

Both Oxford and Cambridge are easily accessible from London.

Oxford lies north-west of London. The easiest way to get from London to Oxford is to take the train from London's Paddington station. The fastest trains reach Oxford in 1 hour and 5 minutes.
For train tickets at cheapest rates, see ►  Raileasy
Alternatively, there are regular fast buses from Buckingham Palace road, London, to Oxford: the "Oxford Tube" bus service takes 1 hour and 40 minutes, with up to five departures an hour.

Buses run from Victoria Coach Station to Cambridge, but the journey, though normally cheaper, takes about two and a half hours. 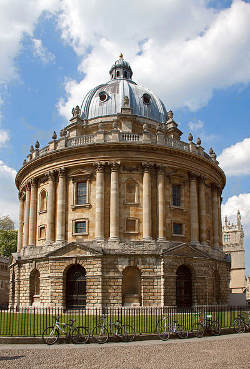 The colleges of Oxford are clustered round the the city centre and its main artery, the Broad. Most colleges admit visitors to their public areas, including historic quadrangles and chapels. Some Oxford colleges charge an admission fee, others do not.
Most colleges have stunning gardens, at their best in Spring. Among the finest are the gardens of Brasenose college and those of St. Hugh's college.... and the Oxford botanical gardens, near Madgalen Bridge.
Oxford's colleges have many plaques and memorials to great and eminent people who have studied there. Among the former students of Christ Church college, for instance, are William Penn, John Locke, W.H.Auden, and Lewis Carroll - as well as 13 British Prime Ministers. The college's chapel has the unusual feature of being also the cathedral church for the city of Oxford; and Christ Church's great refectory was the model for the refectory at Hogwarts, in the Harry Potter films.
In addition to the colleges themselves, Oxford has other notable monuments, the most interesting of which are the Ashmolean Museum, one of the best art galleries and museums in England, and the Bodleian Library, the largest university library in Britain with over 9 million works, and a treasure trove of historic books and manuscripts.
Part of the Bodleian, the circular neo-classical 18th century Radcliffe Camera is probably the most photographed building in Oxford, and the most distinctive Palladian-style building in Britain.
There are a number of other historic monuments in Oxford, such as the nineteenth-century Martyr's Memorial, close to Brasenose college; but no visit to Oxford can be complete without a trip in a punt (a flat bottomed boat), on the river Cherwell. Punts can be hired - either with a punter or on a self-punt basis, from two points, the most accessible of which being at Magdalen Bridge, at the foot of the High Street. Note that Magdalen, in Oxford, is pronounced "maudlin'".
The official Oxford Tourist Information centre is located at 15 - 16 Broad Street, opposite Balliol college. This is one of the departure points for the Oxford hop-on hop-off city tour buses, and for other tours of the city on foot or by bike.
For things to see near Oxford, see Central southern England 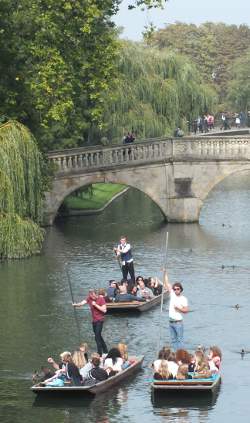 Punting on the Cam at Cambridge

Cambridge colleges, like those of Oxford university, are clustered found the city centre. But in Cambridge, the most emblematic group of colleges are those along "The Backs", those that are built along the banks of the river Cam – mostly on the city side.
Among these colleges are Trinity College, founded by King Henry VIII. The largest of the Cambridge colleges, and with its 31 Nobel prizewinners in the 20th century, Trinity is reputedly the most successful of Cambridge colleges in Academic terms. Among Trinity's most famous alumni were Sir Isaac Newton, Stanley Baldwin, and Nehru. Trinity's Great Court is an early 17th century building, and its famous Wren library, designed by Sir Christopher Wren, is Cambridge University's largest.
Next door to Trinity stands perhaps the most famous of Cambridge colleges in terms of tourism, King's College (photo top of the page). KIng's college was founded by King Henry VI in the year 1441; its famous chapel, essentially built between 1446 and 1515, is reputed to be the finest example of English perpendicular gothic architecture. The King's College chapel annual Carol Service is broadcast on radio and television all over the world, just before Christmas.
Among other colleges that are interesting to visit are Peterhouse, Clare college, Christ's college and Emmanuel college.
About 500 metres down Trumpington street from the main entrance to King's college is the Fitzwilliam museum, with its impressive collection of paintings including four works by Titian and four by Monet.
Punting is a popular tourist activity at Cambridge, just as it is at Oxford. The main punt hire location is at the foot of Mill Lane / Silver Street, which is between King's college and the Fitzwilliam. The most popular punting route is northwards along the "Backs", passing by King's college and Trinity, and under the famous "Bridge of Sighs", at St. John's College. Alternatively, punters can go in the other direction, along the river Cam towards Grantchester.
The Cambridge tourist information centre is located about 100 yards from King's college. The centre organises walking tours of Cambridge, and sells tickets for the Cambridge hop-on hop-off tour buses.  You may also like this ► 4-hour podcast tour (audio guide for walking tours).
For a selection of some of the best places to visit near Cambridge, see the East of England.


Teaching of studying English ?
Discover a small selection of the
Best books for EFL  English