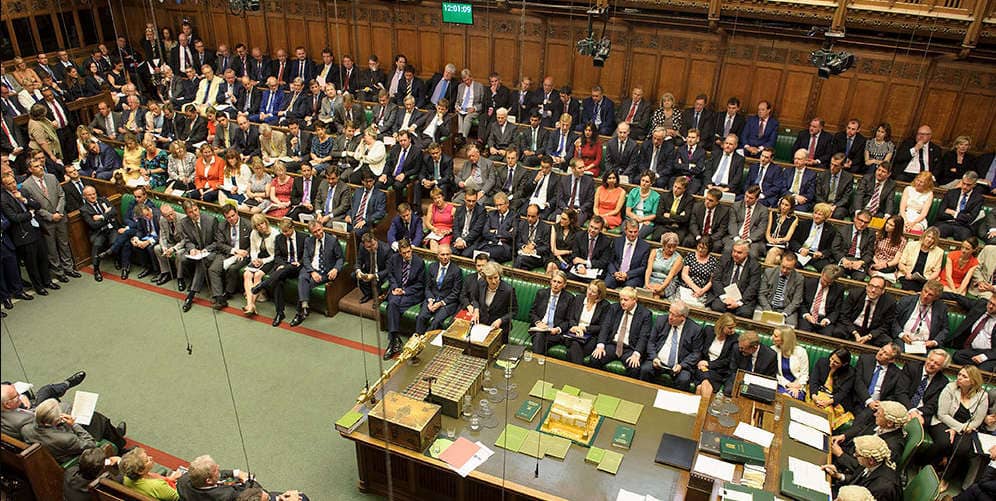 The Parliament of the United Kingdom

The history and workings of the UK Parliament

About-Britain.com -  A thematic guide to the UK


► You are here : About-Britain.com  › Institutions  › Parliament

Origins of the British parliament

The "Palace of Westminster", London, home of the British Parliament


Nicknamed the "Mother of Parliaments" , the British parliament is respected as the most ancient parliament in today's world. Apart from a few brief interruptions , it has carried out its business on the same spot, called the Palace of Westminster, since the year 1265. It was in this year that the Simon de Montfort - an Anglo-Norman baron - convened the first elected parliament of England: the men met at Westminster, which was at the time a village outside the medieval city of London. These elected officials were, of course, lords and barons, not ordinary people, and they were elected by their peers, not by universal suffrage; but each one was there to represent one of the counties or cities in the kingdom of England.

Critically acclaimed for its simple rules, clear explanations, and  pertinent examples
The idea of a "parliament" was not totally new. Before the Norman Conquest in 1066, the Anglo-Saxon kings ruled their kingdom with the help of a council of elders called the Witan or Witenagemot ; like other early parliaments, the Witan was made up of  nobles and men of the church. They chose the next king , and advised the sovereign, but had no real power in terms of government. After the Norman Conquest , William the Conqueror and his successors relied on their system of barons and territorial councils to govern the country; this was the basis of the Anglo-Norman feudal system.
The English Parliament operated fairly steadily for four centuries, acting as a counterweight to the power of the king, and it did so until the seventeenth century. From the 14th century, Parliament consisted of two chambers, the House of Lords (the "upper" house) and the House of Commons (the "lower" house) . But in the middle of the 17th century , King Charles 1st precipitated the English Civil War - the English Revolution - by trying to rule without Parliament. The Civil War opposed the Royalist forces and the Parliamentary forces, under the command of Oliver Cromwell; it ended in the victory of the Parliamentarians . From then on, the English Parliament was firmly established as an essential force in the running of the country.
In 1660 Parliament declared the restoration of the monarchy and established a system of parliamentary monarchy. Parliament's power was however quickly put to the test, and in 1688 Parliament deposed King James II and invited Dutch prince William of Orange to take the crown of England. The success of the "Glorious Revolution" confirmed the role of the English Parliament, a role that was constitutionally defined the following year by the signing of the Deed of Rights or Bill of Rights , one of the major constitutional acts of the United Kingdom. This Bill (new law) formally established the role of parliament and the limits of royal power.
This was the beginning of the modern parliament, with its system of political parties. In 1707 , following the Act of Union between England and Scotland, the English Parliament, based in London, became the British Parliament.
During the 19th century, parliamentary power became increasingly concentrated in the hands of the House of Commons; at the beginning of the century, most Prime Ministers came from the House of Lords (Lords North and Liverpool, the Duke of Wellington); but by the end of the century, the British government was largely in the hands of Prime Ministers chosen from elected members of the House of Commons; these included Gladstone and Disraeli. The last Government led by a Lord was that of the Marquis of Salisbury from 1898 to 1902. Since then (1), all Prime Ministers have sat in the House of Commons .
In 1911, the Parliament formally confirmed the supremacy of the House of Commons; from then on, the Lords could not block bills made ​​by the Government in the House of Commons , and could not even delay budget and tax measures. The 1911 Act was amended in 1949.

Structure and Functioning of the British Parliament today

Britain is a parliamentary monarchy . The British Parliament is a bicameral parliament , that is to say that it is made up of two chambers, or two "Houses"; above the two Houses, but in an essentially formal role , there is the Sovereign - king or queen - also known as "the crown."

Role of the Sovereign 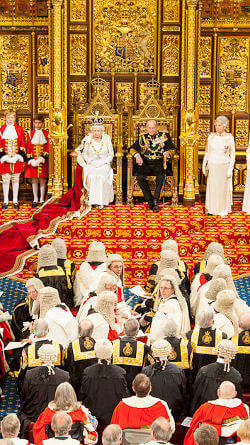 The state opening of Parliament
The British monarch has all authority, but no power. The Sovereign appoints the Prime Minister, and every year opens the sessions of parliament, in a historical and ritual ceremony called the State Opening of Parliament . Historically, this ceremony used to take place in the Autumn; but since 2012, it has been brought forward to May. This is the only regular time when the members of both Houses come together. During the ceremony, the Sovereign reads out the government's intended programme. The "Queen 's Speech" is a summary of the programme "his" or "her" government intends to implement in the next twelve months; but the speech is prepared and written by the Prime Minister's office, not by the Queen.
The second major function of the sovereign is to sign new laws passed by Parliament. A bill does not become law, or an Act of Parliament, until it has " received royal assent ", meaning that it has been been signed by the Sovereign.
The last major function of the sovereign - in the parliamentary context - is his or her weekly meeting with the Prime Minister. By tradition, the latter informs the Sovereign, who is head of state, about important affairs of state and government business, and asks the sovereign for his or her opinion. With over 60 years of experience, the current Queen Elizabeth II has acquired great experience in managing affairs of state, and an unparalleled experience of international relations, and now acts as an experienced adviser, well liked by her Prime Ministers, of all political persuasions .


The House of Lords

This is the "Upper House" of the British Parliament . It consists of about 750 members (a variable number ) most of whom are Life Peers (i.e. not hereditary lords), or people who have been ennobled for services rendered to the nation. These Life Peers are mostly former members of the House of Commons, or former senior officials, judges, or former business leaders or trade union leaders: each government and opposition party has the right, each year, to propose new Life peers .
The other members of the House of Lords are 92 hereditary peers from the "nobility" of the United Kingdom, and 26 Bishops of the Anglican Church.
As mentioned above, the House of Lords can not block bills proposed by the Government in the House of Commons, and can only delay some bills . It is rare that the House of Lords use of this prerogative, other than in exceptional cases; for the Lords to act against the wishes of an elected government would be constitutionally unacceptable. Thus, almost all the bills from the House of Commons are approved quickly by the Lords, and returned for a "second reading" with some proposals for modifications or improvements. It is up to the House of Commons to accept or reject these proposals.
The essential role of the House of Lords is to discuss non controversial subjects, or examine in detail projects for which the House of Commons does not have time. Given the experience of the Life Peers who sit in the House of Lords, the Upper House is an assembly of well experienced former politicians , and is well suited to its parliamentary duties, even if its members are not elected representatives.
In 2012, the Cameron Government proposed to change the status of the House of Lords, making it into a largely elected chamber : but the proposal does not terribly interest the British public, and this change is unlikely to happen in the near future.

The House of Commons

The House of Commons is the main House of the British Parliament in terms of legislative power. It is a chamber composed of 650 members (Members of Parliament or MPs ) elected by universal suffrage. The life of a Parliament is five years.
According to an ancient tradition, MPs are elected by universal suffrage under a system of relative majority, in one round of voting. This means that the candidate with the most votes in an election is elected, whether or not he or she has an absolute majority of votes. This system favors the major political parties, and stable governments - at the expense of smaller parties.
Elected Members of Parliament do not have a deputy, so in the event of the death, resignation or removal of an MP, a "by-election" must be called in order to elect a new MP. Each MP represents a territory, or constituency: the link between an MP and his or her constituency is symbolically and historically very important , and in the House of Commons, Members are not called by their name, but by the name of the constituency from which they have been elected ( or, if they are government ministers, by their function) .

The British Parliament is both Parliament of England and Parliament of the United Kingdom. It is sovereign (see Constitution). Parliament has delegated some of its powers to the regional parliaments or assemblies of Scotland, Northern Ireland and Wales .

Note:
1. In 1963, the Conservatives  appointed to the post of Prime Minister a member of the House of Lords, Earl Home. Home immediately renounced his title, and was elected in a by-election to the House of Commons.

Copyright   : Website and texts © About-Britain.com 2009-2020 except where otherwise indicated


Picture top of page: The House of Commons, 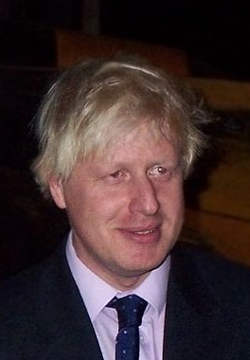 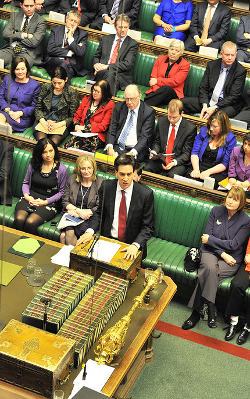 Debate in the House of commons - showing Ed Miliband, former leader of the Labour party (the Opposition)

Discover the top UK stores and brands  that  deliver to UK, Europe and worldwide,  and in some cases free delivery

Photos of the House of Commons and of the Opening of Parliament, reproduced by permission of the British Parliament.
Creative commons licence.