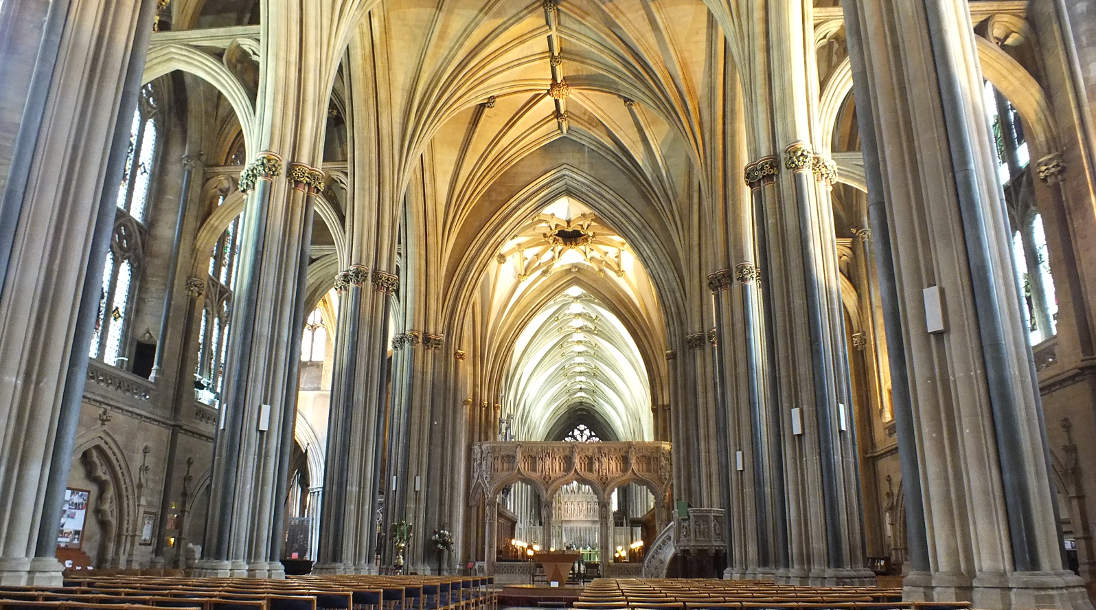 
From Norman romanesque to perpendicular gothic 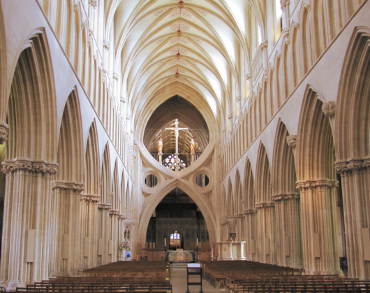 Remarkably pure gothic nave in Wells Cathedral, Somerset
From the seventh century onwards, people in Britain began building churches and even cathedrals; but it was following the Norman Invasion in 1066 that cathedral-building came into its own.
The Normans brought with them the latest styles and skills,and quickly set about building or rebuilding great abbeys and cathedrals. Among the oldest are the cathedrals of Durham and Peterborough, which date substantially from the eleventh century. All, or significant parts, of these cathedrals are built in the Romanesque style, more commonly referred to as the "Norman" style in Britain, as it was the Normans who left to posterity the finest buildings in this style in Britain.
However, it was in the high mediaeval period of the 12th and 13th centuries that most of Britain's and Europe's greatest cathedrals were built, using the Gothic style that spread out from France. The cathedral builders of late Norman and Angevin England, noblemen, bishops and their architects, all had strong links with Normandy and France, and the great English cathedrals of the time have a lot in common with their contemporaries in France. For some english cathedrals such as Canterbury, this even went to the point of importing creamy-coloured Caen limestone from Normandy for the main building. 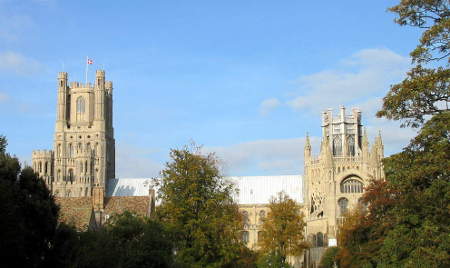 Ely cathedral
Generally speaking, English Gothic cathedrals have national characteristics that distinguish them from French cathedrals. There is less emphasis on height, and more on length; and classic English Gothic cathedrals do not have the great west facades of French cathedrals, with their large rose windows and three great doors. The Gothic style also lasted longer in Britain than on the Continent, culminating in the lighter and more decorative Perpendicular Gothic style, a particularly English feature.
The building of cathedrals often spanned a century or more, during which time styles and architects changed. The cathedrals at Ely, Gloucester, Norwich and Winchester well illustrate the transition from the Romanesque / Norman style in their older parts, to the gothic style in the later building work.

Places to stay in the UK
A selection of hotels, apartments and other accommodation at best rates from  Booking.com
:


England's most impressive Gothic cathedrals are to be found at  Canterbury, Lincoln,  Salisbury, Wells, York, Gloucester and Westminster Abbey.
Note: unlike Britain's national museums, which are free, some of the main cathedrals in England charge an entrance fee, to help pay for their upkeep. The policy is controvertial, and was recently abandoned at Chester cathedral. Most others encourage visitors to make a donation. Entrance is always free for church services and pilgrims.

Twelve of the best

UNESCO world heritage site -  Tyne and Wear, northeast England
The most decorated and largest Romanesque cathedral in Britain, and one of the largest in Europe. The cathedral sits in a defensive position on a rock high above the river Wear. The whole cathedral was built in the 40 years from 1093 to 1133, giving it a singular architectural unity.

Cambridgeshire - 100 miles north of London
Built between 1118 and 1238, Peterborough cathedral is a fairly pure Norman / Romanesque design. The Ambulatory, behind the high altar, is a late 15th century addition, with beautiful "perpendicular gothic" fan vaulting, similar to Kings College Cambridge.

Cambridgeshire - 80 miles north of London, 25 miles north of Cambridge
Perhaps one of the most beautiful English cathedrals. Ely always remained a small city, and today its magnificent cathedral dominates the small city around it. The cathedral has intricate Romanesque stonework, and the interior is perfectly proportioned. 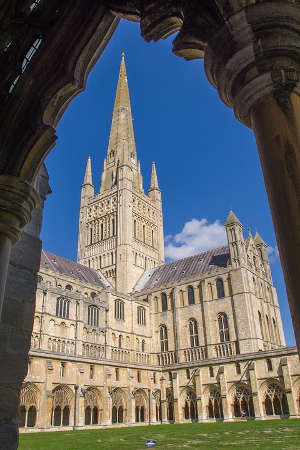 Norfolk, East Anglia
Essentially a Norman / romanesque cathedral, with a gothic spire - the second highest in England. Built 1096 to 1480.  The main structure of the cathedral is Norman romanesque; built of Caen limestone from France. The ceilings and the spire were replaced in the fifteenth century. The cloisters are remarkable for their ornately carved bosses.

Hampshire, southwest of London, near Southampton
This has the longest nave of any gothic cathedral in Europe., the original Norman nave was rebuilt in the fourteenth century, in the perpendicular gothic style, of which Winchester cathedral is one of the great examples. Parts of the Norman building survive in the transepts and in the crypt.

UNESCO world heritage site  - Kent, southeast of London.
England's greatest pilgrimage church, site of the shrine of St. Thomas à Becket, who was murdered in the cathedral. Work on the modern cathedral began in the year 1067; but most of the original Norman romanesque building was rebuilt in later centuries in the Gothic style, firstly to the design of a French architect Guillaume de Sens, later in the typically English perpendicular Gothic style, with intricately-ribbed vaulting.

Lincolnshire, east Midlands, 140 miles north of London
Lincoln cathedral was essentially built in the thirteenth century. From the outside it os one of the most visually impressive of England's great cathedrals on account of its most imposing west facade. Lincoln cathedral is the third largest cathedral in England, and, with its width and height, comparable to the great gothic cathedrals of France – with which it also shares the feature of great (circular) rose windows.

Hampshire, southwest of London
The purest of England's great Gothic cathedrals, built in just 38 years between 1220 and 1258 in the Early English Gothic style.  Salisbury Cathedral has the highest spire in England, reaching a height of 123 metres or 404 ft.

Somerset, in the west of England south of Bristol
Built essentially between 1175 and 1255, Wells was the first essentially pure Gothic cathedral to be built in England. It is remarkable for its richly decorated west facade, as well as for its unique "scissors vault" across the choir. This is an ingenious 14th century engineering solution, added in order to strengthen the structure of the tower that had developed cracks

York, 200 miles north of London
Seat of the Archbishiop of York, and the largest Gothic cathedral in Britain, with the widest nave, and also with some of the finest mediaeval stained glass in England. The cathedral as it stands today was essentially built in the thirteenth and fourteenth centuries, in the decorated and perpendicular Gothic styles.

UNESCO world heritage site
Westminster Abbey has everything of a cathedral except the title. Located in London, right next to Parliament, it has been at the heart of English history since the tenth century. Building of the cathedral that we see today began in 1245, and continued over two and a half centuries. The two great western towers were added in the eighteenth century.
Westminster Abbey has the tombs of many of the Kings and Queens of England, as well as some of the greatest of Britain's writers, poets, politicians and scientists, including Chaucer, Darwin and Oliver Cromwell. It also contains Britain's tomb of the Unknown Soldier.

Other great mediaeval cathedrals and abbeys

And, in ruins, some of the great abbeys that were destroyed in the 16th century at  the dissolution of the Monasteries :
Tintern, Fountains, Rievaulx, Whitby

Photo above:  Bristol cathedral
Photo   ©  About-Britain.com
It was in the year 597 AD that Saint Augustine first brought Christianity to the British Isles. Ever since, the Christian faith has been at the centre of life in the British Isles, marking their  culture and heritage.
More even than the great castles, it is Britain's fabulous mediaeval cathedrals that stand to this day as the most remarkable monuments to the skills and architectural genius of the Middle Ages.. 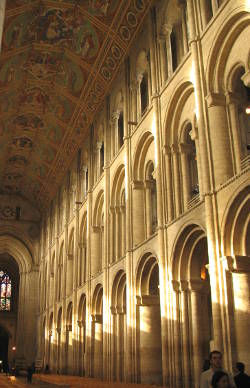 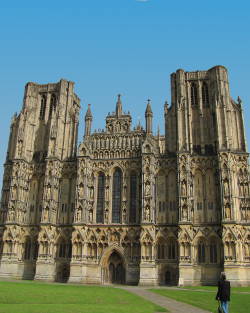 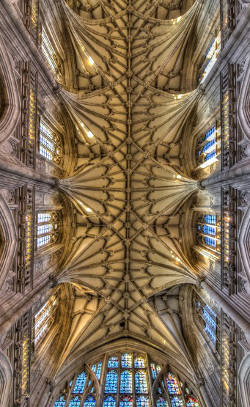 Intricate perpendicular Gothic vaulting in the ceiling of Winchester Cathedral 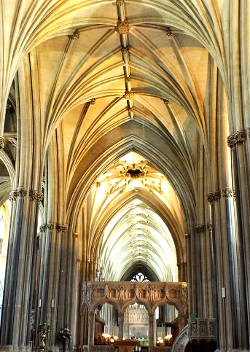 Copyright  : Website photos and texts © About-Britain.com 2020 except where otherwise indicated.