A short guide to London's many free attractions and sights

Discover London without spending a penny.... 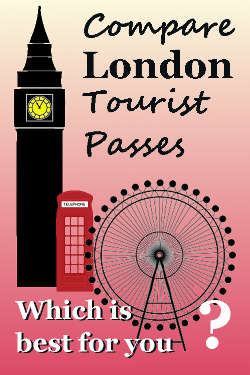 Click image fo find out...
If you're planning to spend a few days in London, or even a week or two, there's no need to set aside a major budget in order to visit the capital's sights and attractions.  While the commercially operated tourist attractions charge an entry fee, London is also full of attractions which are free. From the Changing of the Guards ceremony outside Buckingham Palace, to national museums, and other less well-known attractions - not to mention just admiring the sights of London by day or by night - , there is plenty to do in London even for tourists who do not have a single penny to spare.


Hotels in Britain at the best rates
from Booking.com
On Trafalgar Square , you can visit the National Gallery, with its world-class collections of works by the great masters . Paolo Uccello, Leonardo da Vinci, Raphael, Botticelli , Michelangelo, Titian , Rubens , Vermeer, Velasquez,  Ingres , Monet , Sisley, Van Gogh ... etc. and of course the great British artists such as Turner, Constable or Gainsborough.
Just behind the National Gallery is the National Portrait Gallery, where you can see the portraits of famous people from English and British history, kings and queens, nobles, but also scientists , explorers, and others.
On the Cromwell Road, the Victoria & Albert Museum is the world's largest museum of decorative arts. The permanant collections, to which admission is free, cover all the decorative arts including fashion and photography.
Also in the West End, the Science Museum (website) in Knightsbridge  is a vast museum devoted to science and technology. Collections include cars and locomotives, the wonders of the scientific world from the discovery of space to microtechnology, and the museum also has plenty of play areas for young and old alike, along with interactive games and experiments. the museum also has a giant-screen IMAX screen, which is a paid-entry option (£5) .
A few hundred meters away, the Natural History Museum offers an amazing discovery of the natural world, ranging from dinosaur skeletons and animatronic models, the discovery of micro -organisms, to fabulous presentations the natural world.
On the banks of the Thames, one on the north, the other on the south bank , the two Tate art galleries house on the one hand the largest collection of British art since 1500, and on the other hand (the Tate Modern) the national collection of modern and contemporary art, from the Impressionists to the present day.
Finally, do not forget one of the other great free museums in London, the British Museum (website), with one of the largest collections in the world, ranging from prehistory to modern times, including Egypt of the Pharaohs , Ancient Greece, medieval times, the Renaissance and all the other periods and civilizations of the five continents. The "British" is open every day from 10 a.m. to 5 p.m, and in the evenings on Thursday and Friday.


U.K. TRAIN TICKETS
at best rates
from
Raileasy
In addition to these major national museums, London has many thematic museums with free admission, including the Museum of the Bank of England or the eclectic Sir John Soane Museum , nicknamed the Mini British Museum - not to mention the Imperial war museum in Lambeth, south of the Thames.
The Museum of London, near the Barbican, is the world's largest museum devoted to a single city.
A little further out, in Greenwich, the National Maritime Museum covers all aspects of seafaring and navigation, including the history of emigration. There is plenty here for young people, including navigation simulators and interactive games.

Almost every day, somewhere in London, there are free concerts, sometimes by great musicians. Some free concerts take place in large venues, such as the Royal Opera House, the Barbican center (in the heart of the City) , or the National Theatre on the South  Bank - sometimes with major orchestras . Several times a week free concerts are given by the students and teachers of the Royal Academy of Music or the Royal College of Music (large London schools of music - check their websites). For example, free concerts are given by musicians from the Royal College of Music every Wednesday at 6 p.m. at the National Gallery, Trafalgar Square. Check local events listings for free concerts in London churches such as the Church of St. Martin in the Fields, or in the great cathedrals of London.
During the summer, all kinds of concerts take place in the parks and gardens of London, and plenty of them are free.
Free theater is less common, but it is often possible to get theater or concert tickets for the modest sum of 5 or 6 pounds, when buying on the day of the concert. Standing room at the Globe Theatre (a reconstruction of the 16th century theater where Shakespeare worked ) usually cost about 5 pounds.
Discounted theatre tickets are available online from LondonTheatreDirect.com .
For people living in London and able to book well in advance, many other possibilities exist such as free concerts at the BBC.
Finally, do not forget the many festivals and other street events, such as the Lord Mayor's show ( November) or the famous Notting Hill Carnival (late August).

On foot, you can go anywhere in London for free. You can download free detailed guides to discover areas of London by clicking here.
There is free public transport in London... for children up to the age of 10 (inclusive). Yes! It's true ! London travelcards are free for kids up to the age of 10 ! From 11 - 15, they are half price; from 16 upwards, they are full price.
Travelcards give free use of buses, underground trains, and surface trains. A "one day adult anytime" travelcard currently costs £12. (Dec 2015). the most expensive travelcard, a seven-day anytime travelcard for zones 1 - 6 costs £58.60.
Travelcards can be bought online from the official Travel for London website.
If, as a tourist, you have come in to London using a day travelcard, make the most of your day's travel card (See getting round in London) and discover central London from the top of a double decker bus at no extra cost .
The most interesting line is route 9 , between Oxford Circus and Lambeth Bridge (or vice versa , or return), passing by Big Ben and Parliament , Whitehall, Trafalgar Square and Piccadilly Circus.

This is a Thames riverside walk from Saint Paul's Cathedral to Westminster or vice-versa. From Saint Paul's, follow the walkway south, to cross the pedestrian Millennium Bridge. The path then follows the south bank of the Thames westwards, crossing back over the Westminster Bridge, opposite the Houses of Parliament.

Free shows and other attractions 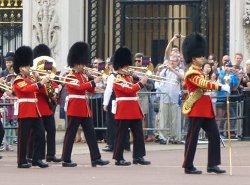 The most popular free show in London is the Changing of the Guard at Buckingham Palace, every day at 11:30 a.m. from May to July, and every other days during the rest of the year . The event does not take place if it is raining heavily.
Otherwise, admire the guards on duty in front of other royal buildings, such as at the entrance to Horseguards Parade on Whitehall, near Trafalgar Square.

Note: The red-tunicked guards on duty in London are not just there for show! London isn't a theme park; these are real elite soldiers of the British army, and their rifles and machine guns are loaded ....

Walk along the Thames in the area of ​​the Tower of London, and see the guardians of the Tower (the "Beefeaters") in their ancient dress.
Visit the collection of historic ships in Saint Katherine's dock, just east of tower Bridge. 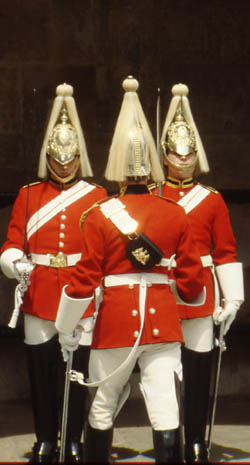 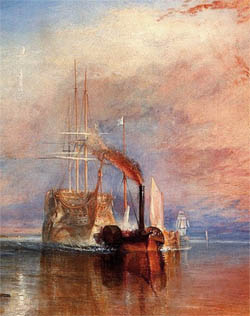 
Hotels with character, country inns and more
Check out
Independent hotels in Britain 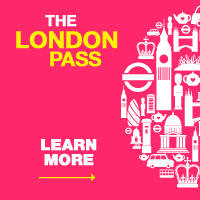 Copyright  : Website photos and texts © About-Britain.com 2020  except where otherwise indicated.Photo of the fighting Temeraire: public domain