Historic and natural heritage sites in Kent Sussex and Surrey

Accommodation : Hotels, cottages and b&bs
at best rates from Booking.com.
Choose your area  at or near :

Arundel castle, east Sussex
For a day out from London, or a weekend break, the southeastern corner of England is an area that has plenty to offer, from castles to cathedrals and wonderful  gardens to a spectacular coastline.

For the purposes of this guide, "Southeast England" is the areas of England lying to the south and southeast of London. It includes the outskirts of London south of the Thames, and the counties of Kent, Sussex and Surrey.
It does not include the whole of the statistical area of "Southeast England". For other counties in this area - Hampshire, Berkshire, Buckinghamshire and Oxfordshire, see Southern England .
For north of the Thames, see East of England.

Visiting the Southeast of England. 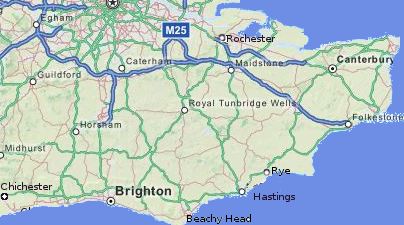 The Southeast of England is easily accesible from London and also from the Continent of Europe. International Eurostar train services stop at Ashford in Kent, and all the towns and cities in the southeast can be reached by train from different London stations, notably Charing Cross, Victoria and London Bridge.
The area is also served directly by car-ferry and Channel Tunnel services from Continental ports, notably by rapid services from Calais to Dover .
Most of the main roads in the southeast of England radiate out from London: there is no main arterial route along the south coast of England between Brighton and Folkestone, but the minor roads in  this part of England pass through many attractive areas of countryside, villages and small towns.

Local accommodation: ► Find places to stay in Southeast England : Hotels, cottages and b&bs in:
on Booking.com

Ten of the best historic monuments and sites in southeast England

Photo top: Beachy Head, where the South Downs National Park reaches the sea.
Easily accessible from London, the southeastern counties of Kent, Surrey and Sussex offer not only some of the most beautiful and classic countryside in the south of England, but also a great choice of castles, cathedrals, stately homes and other historic sites to visit.

The Royal Pavillion at Brighton