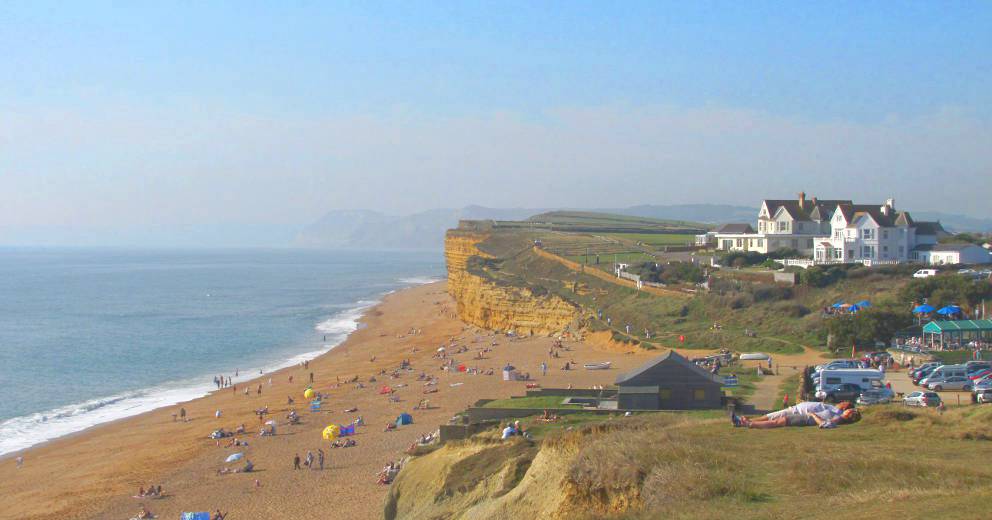 The Coasts of England


You are here:  About Britain  › Tourism  › Coasts of England


Beside the sea in England -  shorelines beaches & resorts


Great Britain is an island, and England is half of this island, and has a third of its coastline. No English city is more than 70 miles or 120 kilometers from the coast , and the majority of the population lives within 60 km of the sea Thus, the coast and the sea are very important things for the English. Ever since people first lived in England, the sea has marked their history , their literature, their culture, their economy , their eating habits, their society, their attitudes, and more recently their leisure .

The English have been enjoying the pleasures of their seashores for over 250 years. It was way back in 1750 that the seaside town of Brighton, 60 miles south of London, began its transformation from fishing harbour into a seaside resort for Londoners, coming to enjoy the health benefits of fresh sea air and sea water. In the early 19th century, the Prince Regent, later King George IV, firmly established the popularity the seaside as a place for leisure, by building the famous Brighton Royal Pavilion, a royal seaside holiday home designed in an exotic Indian oriental style .
Today, Brighton remains a jewel in the crown among the great English seaside resorts , fully equipped to accommodate guests in any season, tourists .... or large conferences . But Brighton is not alone.  During the 19th century, all round the English coast, large resorts sprang up, it first for the new middle classes from the big cities, later for the working classes too .
Until the late 1960s and the advent of cheap international flights between Britain and the Mediterranean coast , these resorts were the preferred holiday destinations of English of all classes. They remain popular today, especially for older people and for people wanting a short break from city life.


The English coast on foot.

Work is currently underway to complete a footpath right round the English coast. The project should be ready by 2020. Long sections of the route already exist. It is already possible to walk most of the southwest coast, from Southampton round to Bristol along the southwest coastal path, which follows the stunning coastline from Falmouth, in southern Cornwall, to Ilfracombe, in north Devon.

Most popular seaside resorts by coast :

Cities whose names are written in bold have a large hotel capacity and infrastructure for hosting major national and international conferences .

General overview of the coasts of England.


1 . The Channel coast - the south coast of England, from Ramsgate (Kent) to Penzance (Cornwall) . 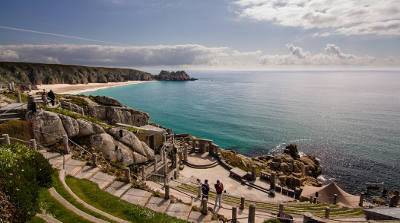 Open air theatre at Minack, on the southwest tip of Cornwall
This is England's most popular coastline. It offers many small towns, once fishing towns now small resorts  or small ports,  popular places to retire to. In the eastern part, the coast is characterized by plenty of great beaches, some of sand, some of shingle. The Hampshire coast, between Chichester and Poole, is particularly popular with yachtsmen because of its coves and its harbors, particularly around the Isle of Wight. To the west of the peninsula of Portland Bill, the coast is more rural, with small towns nestled between the cliffs at the mouth of rivers, such as Lyme Regis and Sidmouth. Virtually the whole of this coast is very attractive;  from Dorset to the tip of Cornwall, the coast is well protected and coastal footpaths attract many hikers. To the west of Torquay, the south coast of Devon and Cornwall is rocky and indented, a very attractive coastline of beaches, inlets and estuaries, and is also popular with yachtsmen.
See also: Southeast England

2 . The west coast of England, Land's End to the Scottish border .

The English Atlantic coast. The north coast of Cornwall and Devon is very rocky, but offers beautiful and large sandy beaches. Open to the Atlantic swell, these are the most popular British beaches for surfers. The seaside resorts here are small but popular. The " Atlantic Coast" continues as far as the town of Minehead, a small resort in Somerset . Further north, it becomes the Severn Estuary, though there is a big and popular seaside resort at Weston super Mare, near Bristol .
The Irish Sea : North of the Welsh border, the coasts of Cheshire and Lancashire are noted for their great sandy beaches. This coast is well-known for its large popular resorts which grew up in the 19th century to cater for the inhabitants of large industrial cities of northern England. It is a part of the coast that is very rooted in tradition, and the resorts remain popular with people from nearby cities.  Blackpool, Britain's most famous seaside resort,  likes to give itself the appearance of a small Las Vegas; as well as amusement parks , the city has plenty of casinos, slot machines, cinemas, fast food restaurants and other entertainment venues.

Very different from all that, the coast of the Lake District is quite sparsely populated , except for small coastal towns like St Bees or Whitehaven. While the Lake District itself is a very popular tourist area, the coast is less popular, as this is one of the wettest areas of England.  It is also worth noting that there is a nuclear waste reprocessing plant at Sellafield, on the Lake district coast.

3. The North Sea coast - the east coast of England. From Kent to the Scottish border..

Despite its reputation as cold coast, the east coast of England, bordering the North Sea, has plenty going for it. Resorts are relatively rare, and therefore it is a coast that offers long stretches of fairly deserted beaches, especially around East Anglia.
The coast of East Anglia is popular with bird watchers, because it is a region rich in sedentary and migratory waterfowl. This part of England, like the Netherlands on the other side of the North Sea, is very flat , and just inland from the coast, there are large areas of fens and an area of lakes known as the Norfolk Broads, very popular for boating.  See the East of England.
Halfway up the east coast is a large square bay, called the Wash, one of the most important wetlands and bird sanctuaries in Europe .
To the north of the Wash , the coast alternates between cliffs and flat areas, with relatively little in the way of tourism.
Other sectors of the North Sea coast that are popular with tourists are the coast of North Yorkshire, south of the small historic port Whitby , and the far north coast of Northumberland, a rocky  windy coastline exposed to the rigors of the north Sea . This coast is famous for its castles and ancient monasteries . Between these two areas, between the rivers Tyne and Tees, there is an industrial area with some of the largest coalfields in England, where coal mines once stood on the shore, and even sent their workers to work few kilometers under the sea ... 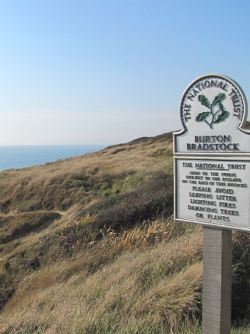 Coastline protected by the National Trust


Taking the train?
Find tickets at best rates from
Raileasy


Hotels with character...
Find  Independent hotels in the west of England 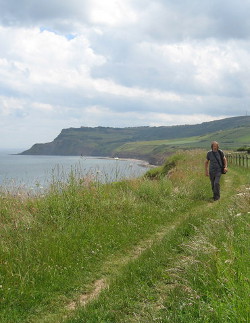 The coast of north Yorkshire 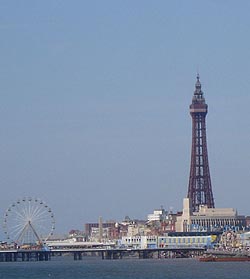 
Going to France too ?
check out The coasts of France