Preserved railways, trains and other events

The heritage of steam : preserved railways, trains and other events

Since the demise of steam trains on Britain's railways, thousands of enthusiasts and volunteers have been working hard to ensure the survival of this great British invention, on heritage railways and other special events around the country. 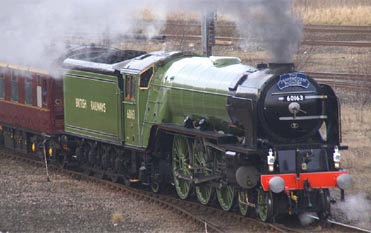 Tornado - a brand new steam locomotive built by volunteers
Are they crazy, the British? Or is it just nostalgia? Not content with having saved and preserved almost 400 steam locomotives (enough to run a full-scale main-line railway, if oil and electricity were to run out), they recently lauched a brand-new steam locomotive, built from scratch by a small army of volunteers with the necessary technical skills.
And it was not just any locomotive! The " Tornado " is a massive mainline express engine, an  A1 class "Pacific", built from the original plans of  A.H.Peppercorn , who was chief engineer of the London & North Eastern Railway after the second World War. This class of locomotive was built to haul the heaviest of mainline trains between London and Scotland, a distance of over 600 km or 400 miles. In February 2009, the Tornado, brand new, was the first steam locomotive in the 21st century to pull an express train from the north of England to Kings Cross Station in London - at speeds up to 70 mph or 120 km / h . Since then, it has clocked up a speed of over 100 mph (160 km/h) on a specially authorised test run.

U.K. TRAIN TICKETS
at best rates
from
Raileasy
Now, this locomotive has joined the small family of steam locomotives that are authorised to haul special trains, which run almost every weekend of the year, on the national rail network. (Schedule of special trains). 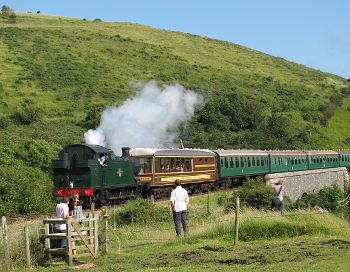 The Swanage Railway, in Dorset
But for a moment of nostalgia, and to take a trip into the past on a steam train, there's no need to follow Harry Potter in search of some Hogwarts Express, or to book a seat on a special event train for railway enthusiasts: it is much easier than that!

Hotels in Britain at the best rates
from Booking.com
Britain has more than a hundred lines or museums with steam trains. "Heritage lines" and regular heritage trains also operate on a few sections of the national rail network. All in all, visitors have a vast choice of steam-hauled trains, running over distances ranging from a couple of miles to over 40 miles (almost 70 km), and double that for those who do the round trip.
Most of these lines offer a steam-hauled service every day in July and August, every weekend in the spring and fall; and of course, many of these lines are among the most visited tourist sites in their region . All these lines operate wholly or largely through the efforts and dedication of hundreds of fans and enthusiasts, who volunteer every weekend, to help provide an authentic visitor experience and a trip into the past.
In addition to the many heritage railway routes, Britain also has a numpber of major railway museums, including the National Railway Museum in York, the world's biggest railway museum.
You will find below a selection of some of the best heritage steam railways in Britain, the ones that offer the longest or most picturesque trips, or those that are most interesting in terms of the material used.
After that, you will find a list of top railway museums in England.

Top ten lines: a selection of the best heritage lines with steam traction. 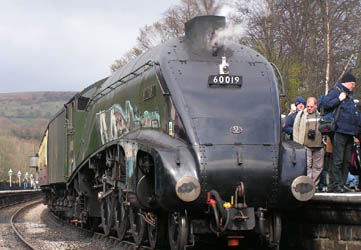 A  great pacific locomotive on the North Yorkshire Moors Railway


Photo above: an exceptional event; steam returned briefly to the London Underground, for a few nights in 2013, to commemorate the 150th anniversary of the opening of the world's first underground railway.
Photo   © JR - About-Britain.com.
From their earliest beginnings in the late 18th century, and in particular since the start of the "railway age" around 1830, railways have been aprt of the landscape in Britain.  Today, the steam train experience, with its steam and smoke and unforgettable sounds, survives on about a hundred heritage railways up and down the country – and also with the many steam-hauled special trains that now run again on the nation's main rail network. 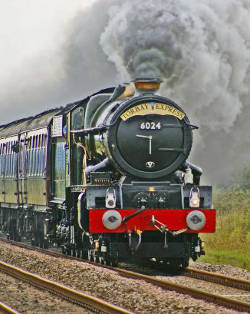 A special steam train running  at speed on the mainline network. 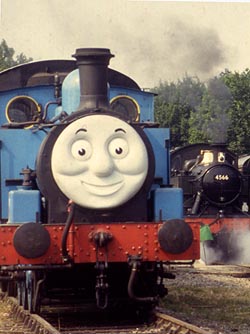 A children's favourite - Thomas the tank engine, on the Gloucestershire and Warwickshire railway 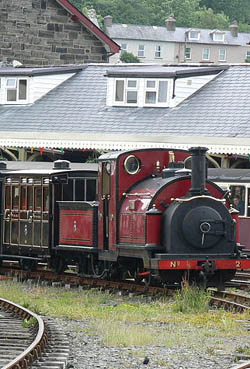 The Ffestiniog, one of the great little railways of Wales

Copyright  : Website photos and texts © About-Britain.com 2009 - 2020  except where otherwise indicated.