Historic and classic shops that define British life and style


You are here :  About-Britain.com  ›
Shopping  ›
Typically British
About-Britain.com - a discovery of the United Kingdom
The shops and stores that define Britishness
Modern shopping began its life in London, and a number of historic stores and brands still define classic British style to this day
A little history

Shopping, in today's sense of the term, began its life in London, and it did so almost three hundred years ago.
It was back in the early 18th century that the start of the Industrial Revolution began to radically change the nature of British society. New industries, and with them new commerce, not only created new wealth, giving more people more money in their pockets, but it also led to the total transformation of English society. Until the Industrial Revolution, almost all the population lived in small towns or in the country; the only shops that existed were , in the words of the old nursery-rhyme, "butchers, bakers and candlestick makers". For everything else, or at least for those who had money for anything else, shopping meant the weekly market, or buying from wandering pedlars.
As the Industrial revolution changed society, more and more people moved into the cities, and more and more people had money to spend; and they needed somewhere to spend it.  London, the great port city, already had its coffee shops and tearooms. Some of these were also places where wealthy merchants and  gentlemen would meet up to do business with ship-owners who could import luxuries from far away, or export products made in Britain. Among the oldest of these was Lloyd's Coffee House, established in  1687, which later transformed into Lloyd's of London, which is now the world's greatest  insurance market.
One of the first modern shops to open up in London was Fortnum and Mason's grocery store which opened  in 1707, and is still reputed as Britain's top grocery store to this day. Many other small shops began to open in the new "West end" of London, in streets like Savile Row or St. James's St, or Bond Street, selling clothes and household requirements for the needs of the new urban upper classes and middle classes. Some of these historic shops, such as wine merchants Berry Bross and Rudd, on Pall Mall, founded in 1698, are still there today.  Even older is Lock & Co's shop at 6 St James's St which was set up in 1676; however as a shop making and selling gentlemen's hats, this is a shop that caters nowadays to a very narrow clientele 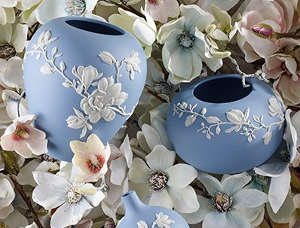 Wedgwood blue jasperware, iconic British pottery
In 1768, one of the great pioneers of the English Industrial Revolution, Josiah Wedgwood, set up the first London showroom for the fabulous pottery he produced in his factories in Staffordshire. Wedgwood sold his pottery to the great and good, and in doing so created the idea - though not the word - of marketing, by offering his customers the same china and porcelaine as were used in royal palaces. Anyone with enough money, who wanted to buy the latest style and most classic products of British household tableware, knew that they could get them from Wedgwood. Other pottery manufacturers, such as Crown Derby and Spode, later followed Wedgwood's example, selling their fine tableware through outlets in London.
By the end of the eighteenth century, London had become firmly established as Britain's, and the world's, premier shopping city.... indeed, in terms of the variety of goods available at the time, the world's only shopping city. It even had the world's first toy shop, Hamleys, established in 1760, and arguably the world's first department store, Harding, Howell & Co, on Pall Mall, which traded from 1796 until 1820. The world-famous Harrod's department store, which is still trading today, dates back to 1834.
Having been first of the mark in terms of industrial development, Britain was also the first country in the world in which styles and fashion became national standards. Before the 19th century, fashions and style were mostly a local affair. There was some corssover from area to area, since some people travelled; but by and large, most people did not travel, so were only familiar with what other people wore, or how they liveed, in their own local area. The industrial Revolution changed all of that, leading first to the establishment of national canons of fashion, then later, with advertising and international trade, to the development of international fashions.
Today, a number of the historic shops and brands that have come to define British fashion and style in clothing, lifestyles and personal image, are still there and reaching not just a local British clientele, but a worldwide audience for whom the expression "typically British" remains synonymous with good quality and  good taste. And the process is ongoing; alongside the historic brands are newer more modern brands that have proved their excellence and come to lengthen the list.
Some of the most classic "typically British" stores and brands are listed below, starting with the oldest. Click any link to visit the merchant's website


What is the typically British gift? Or what are the classic British styles when it comes to clothing, household goods, and lifestyle accessories ? Where Britain is concerned, the general perception is that things that are "typical" are those that evoke or epitomize tradition, heritage, and a homely lifestyle that has evolved over more than three hundred years.
Some of the names that helped create this paradigm over two centuries ago are still with us today, selling classic Britishness not just to people in the UK, but to the whole world.

You may also like...
Online shopping from the UK
UK online stores that deliver to the UK and international markets

You may also like...
Online shopping from France
French online stores that deliver to the UK or worldwide